“
Not only seeing our friends that we met before, but definitely meeting other artists from other countries, and having wonderful sharing moments was such a precious experience for me.
Maria Tri Sulistyani (Indonesia)

It’s been a while for me to get involved in the scene of theatre for young audiences. I started Papermoon in 2006 with the aim to accompany children by giving opportunities for them to experience good art, to have a chance of not being similar to the others, to find themselves that they are unique, and appreciate others. But the direction was changing only within a year.

Starting on 2014, we did some collaboration works with a theatre company from Australia, that has aims to work with children. And we have been doing simultaneous collaborations since then, and it brough a big influence to the development of our works too.

Working with children became one of our points of interest in Papermoon, though we feel that we still need to learn much more, because it’s been a while for us being separated with the children’s world.

Then the invitation from ricca ricca*festa and Japan Foundation came. There was a big question in the beginning, 'why us'? Why Papermoon Puppet Theatre?”. But then I decided to go, together with my son, and my husband who is the Artistic Director of Papermoon Puppet Theatre. Because we knew that joining the conference, and attending the festival would bring us to another journey in our creative lives, as artists and also as parents.

Meeting the other candidates on the street in the first day of Ricca-Ricca Festa in Okinawa, became a fire cracker for me. I was so happy to see our dearest friends from other countries in Southeast Asia gathered in the same path with us. Not only seeing our friends that we met before, but definitely meeting other artists from other countries, and having a wonderful sharing moments was such a precious experience for me.

What I loved about ricca ricca*festa this year, was the equal quality of the performances and forums. I attended most of the forums, and I found them as precious as the performances. I learned a lot in the forum about ‘Baby Drama’ that was presented by Mr. Roberto Fraberti, and experienced ‘Baby Space’ directed by Dalija from Serbia. Honestly, I had never experienced that field of arts for babies before. So definitely, this experience was an eye opener.

About the “NOW and FUTURE of TYA in Asia” forum, I found that it was very interesting, because we got the chance to discuss several points. The idea of mapping is also interesting to see how TYA in many countries across Asia has been developed.

But honestly at that moment I felt that I was not really capable on giving other names, because I am not focusing on TYA only, so I am sure that I missed lots of information about it.

Notes: it would be great if there was a notification before we attend the festival, about ATYA’s needs on doing mapping about TYA in Asian countries, so we could prepare for it.

The Asian TYA Networking was really great too, because we could see a wide variety of other delegates who came to attend the forum. It felt speedy, because there was so much information that the delegates wanted to share. Honestly, I feel a bit disturbed, because it seems like some of the delegates had not prepared slides to talk about their practice, or their point of view to work in the fields of Theatre for Young Audience. Maybe they need to have a little guidance about the point, so the presentation could be focused on a certain theme, and not just ‘showing’ what each delegate had been doing over the years.

One of my favorite forums was the wrap up discussion on the last day. Since I didn’t have the big picture of ricca ricca*festa, finally I got the information about it by the end of the day. The forum felt more intimate, and we could have discussions within the theme that we would love to talk about, which was ‘making festivals in Asia’. From that loose forum, we learned from different festivals of different backgrounds, and when it ended up with further connections made between delegates, I felt that the ATYA forum at ricca ricca*festa really worked! It was not the only the place where producers could buy a show, but further than that, we built links, made friends and connections.

Watching different performances, alone, or together with my son and my husband at ricca ricca*festa brought us to a mutual understanding that for a week, parents follow their children needs. We managed to see almost all of the performances at the festival.

My highlights were Raw, Hogiuta and A Mano. It was a big surprise for me, and my husband to watch a play like RAW in a festival for children. A very strong idea, and images were presented on the stage that made me hold my breath. I was questioning, in a festival for children like this, where the kids had been amused and entertained, and everything was committed for their needs, are we thinking of those unlucky kids?

Hogiuta was a Japanese play, performed in Japanese language that I didn’t understand, but I loved every part of it, from the very beginning to the very end! I wish that a good quality show like this could have a subtitle. Also remembering that the play is presented in an International Festival, and it has a very strong message. Seeing Japanese artists performing, is actually one of the reason why I really want to come to this festival.

A Mano was a sweet, intimate play that I loved at the festival. I could say that the play itself actually touched the adults heart very deeply.

Well… this is the end of my report. Thank you so much for having us in Okinawa. Thank you for giving us a recall to the fields again. Now I can hear the call, and the need to get back to the young audiences is as strong as the sound of Summer cicadas in Okinawa.

Hope to see you again. 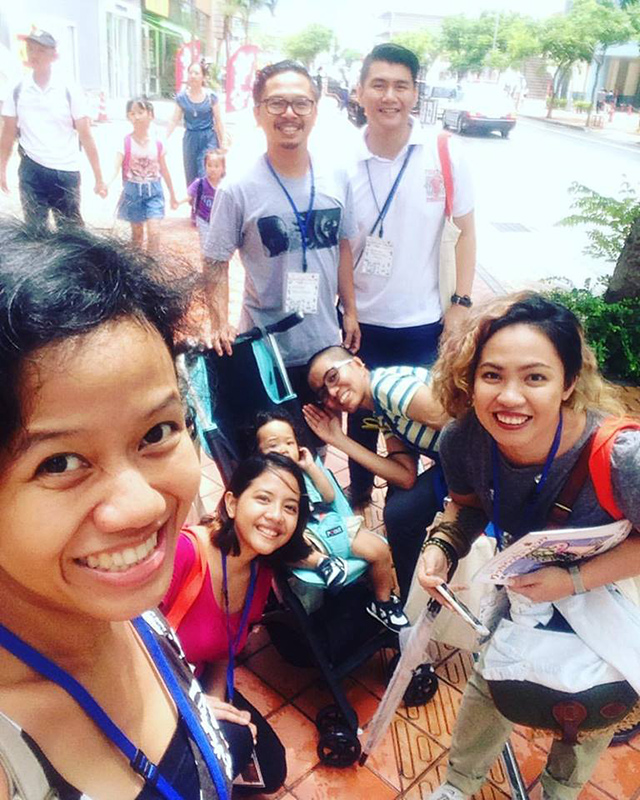