“
We’ve been able to learn so much from each other, share resources, and even assist each other with training and emotional support etc.
Kung Yu Liew (Malaysia)

This report is my compilation of my observations and reflection pertaining to my experiences in the Asian TYA Network programme in the capacity of a participant, researcher and facilitator from 2016 to 2018.

Outside of my involvement with the Asian TYA Network, I have been the Artistic Director for the George Town Heritage Festival, Penang and am currently involved in the organizing up the Little Door Festival for young audience in Penang, Malaysia sometime next year.

Inaugurated in 2016, the Asian TYA Network was established by ACO Okinawa (the host of ricca ricca*festa) with the intention to understand the situation of Theatre for Young Audiences (TYA) within the areas of East Asia and Southeast Asia, and to form a network of connections, rapport and support between TYA practitioners from the various countries, and to further expand the possibilities of collaborations.

While much of the format of the programme remained the same as in the previous year, what was changed this year was the focus on addressing the issue of ‘Theatre for Social Change’. This change in direction was developed in response to the findings of the research visits performed the previous year in Cambodia and Myanmar. (The findings of this research visit are covered in a separate report.)

Moving on to the core of the report, the 2018 Asian TYA Network programme involved 15 selected participants from 11 countries, which includes the four facilitators including myself.

Each of the participants who attended the Asian TYA Symposium was given a platform to open up and share about themselves and their practices. This was done with the intention that we would be able to get to know the participant better, and to gain a greater understanding of the situation of TYA and the performing arts within their community.

In addition to these personal sharing sessions, each individual was also invited to participate in three sessions of discussion that was open to members of the public. This provided each of us with an opportunity to dialogue about the selected topics that arose based on the findings of the research trips. The three sessions and the topics that were discussed are as follows: TYA and Practices, TYA for Social Change, Future of TYA in Asia.

As in previous years, we were provided with passes to watch selected performances and invited to participate in post-show discussions with the director and performers. This would then be followed up with a discussion among the participants to share their individual perspectives and insights about the performances and our critical observations on its impact and relevance to the audience.

Of all the activity we do within the programme, I feel that this activity is the most valuable for the participants because of how it casts us in the role of both the practitioner and the audience, and trains us to critically think and evaluate the impact.

Moreover, the process helps to focus on its relevance to the cultural, social and geo-political situation. Watching the performance together and discussing our personal opinions and perspectives about each performance allows us to share and learn from another regardless of our professional level or background. This sharing of opinions also helped us to reflect and critically observe our work.

Among the shows that I had watched this year, the two performances that really stood out for me were the performances titled: ‘Broken Words Fly Into the Sky’ by Shiijya Dance Project, Japan. In addition to the members of the dance company, the performance included three senior war survivors (average age over 80). More than any other performance I saw at the festival, this presentation struck me with its deeply meaningful presentation of the hardships wrought by war and the memories of the survivors.

We were told that one of the performers broke into tears during most of the rehearsal having to go through the painful memories, but she endured and kept on going so that their voice is being heard with the objective to share the message ‘we can dance, because we are alive’. Watching their performance, all of the Asian TYA Network members strongly empathised with the survivors, and keenly felt the pain they went through the Battle of Okinawa in their movements and singing.

The other piece that touched most of us was ‘White’ performed by the Catherine Wheels Theatre Company, Scotland. Even though White is intended for young audiences aged between two to four, the message it conveys is powerful, impactful, and universal. At the same time, for the young audience, White is playful, visually exciting theatre experience.

Coming from Malaysia which is multi-racial, cultural and religion, I found this piece to be particularly relevant as a reflection to my nation’s society which struggles to accept our differences in cultural, religious, race and even gender. I really hope that we have a chance to present this piece in our festival in the near future.

As a professional who’s deeply passionate about the arts and working with communities, I firmly believe that the Asian TYA Network has been a tremendous boon for theatre practitioners, especially those who come from developing countries in the ASEAN region because of its emphasis on looking at ‘our practices from an Asian context’.

Most such TYA symposiums tend to be slanted on the Western perspective and tend to be biased and perhaps even somewhat condescending as a result. While our cultures may be different, members of the various Asian nations oftentimes share many commonalities which is crucial to help build a culture of theatre that is focused on the Asian identity.

Over the past three years, I’ve had the opportunity to speak with other participants and we’ve come to realise that theatre practitioners from developing countries are often isolated path due to the comparative lack of support for the arts from their respective communities and government.

Based on their feedback, we’ve found common ground that the Asian TYA Network programme has proven to be greatly beneficial for them in both a professional and social capacity. In addition to being a far-reaching network of peers, the Asian TYA Network has been a rare chance and eye-opening experience for them to be able to experience international level performances from other cultures, and to be exposed to new ideas that push the boundaries of the possibilities of what theatre can accomplish.

Being able to meet and exchange with fellow practitioners from our neighboring countries significantly empowers us with confidence, and provides affirmation that we’re not working alone. By providing practitioners with opportunities to share their passion and best practices, as well as to learn and support one another, providing us with affirmation about our strengths and identify where we need to improve.

Because of the connections we’ve formed through the Asian TYA Network, we’re beginning to see indications of progress as members of the network have been reporting that they intend to continue collaborating and building on the things that were established over these last three years.

At this time of writing of this report, I’ve received word of the following activities by several participants who are continuing on the work and rapport established through the Asian TYA Network:

On a personal level, the Asian TYA Network has been an extremely positive influence and a catalyst which has contributed significantly towards my growth, confidence and involvement in theater to the extent that I intend to launch the first TYA festival (The Little Door Festival) here in Malaysia next year.

As all of us come from different countries with different cultural and traditional backgrounds, and practices; we need a network like this to bridge this divide and further shape the future of the performing arts in the region.

There is no ‘one-size fits-all’ solution that applies to everyone but because of the Asian TYA Network bringing us together, we have been able to communicate and identify the needs of practitioners in each country. More than that, we’ve been able to learn so much from each other, share resources, and even assist each other with training and emotional support etc.

In closing, I would like to state the Asian TYA Networking programme is a fantastic programme for helping TYA practitioners in Asia to develop, and I sincerely hope that it will continue and be an ongoing programme.

I would like to extend special thanks to ricca ricca*festa and the Japan Foundation Asia Center for hosting us and the following individuals in particular who welcomed and took care of all of us during our stay:

• Hisashi Shimoyama who first invited me to attend the Asian TYA Network in 2016.

• Nao Miyauchi for the amazing work of putting this together and still staying calm.

• Sonoko Chishiro, Xanthe Lau and Jeannette C for the superb coordination work and their brilliant suggestions to use childhood games/foods as an ice breaking tool that made us become kids again.

I’d also like to extend my warm thanks you to all the new friends I’ve made over the 3 years and crew members who made this event a truly memorable one. Last but not least, a very special big arigatou gozaimashita to ACO Okinawa, ricca ricca festa and The Japan Foundation Asia Center for their support from 2016-2018. 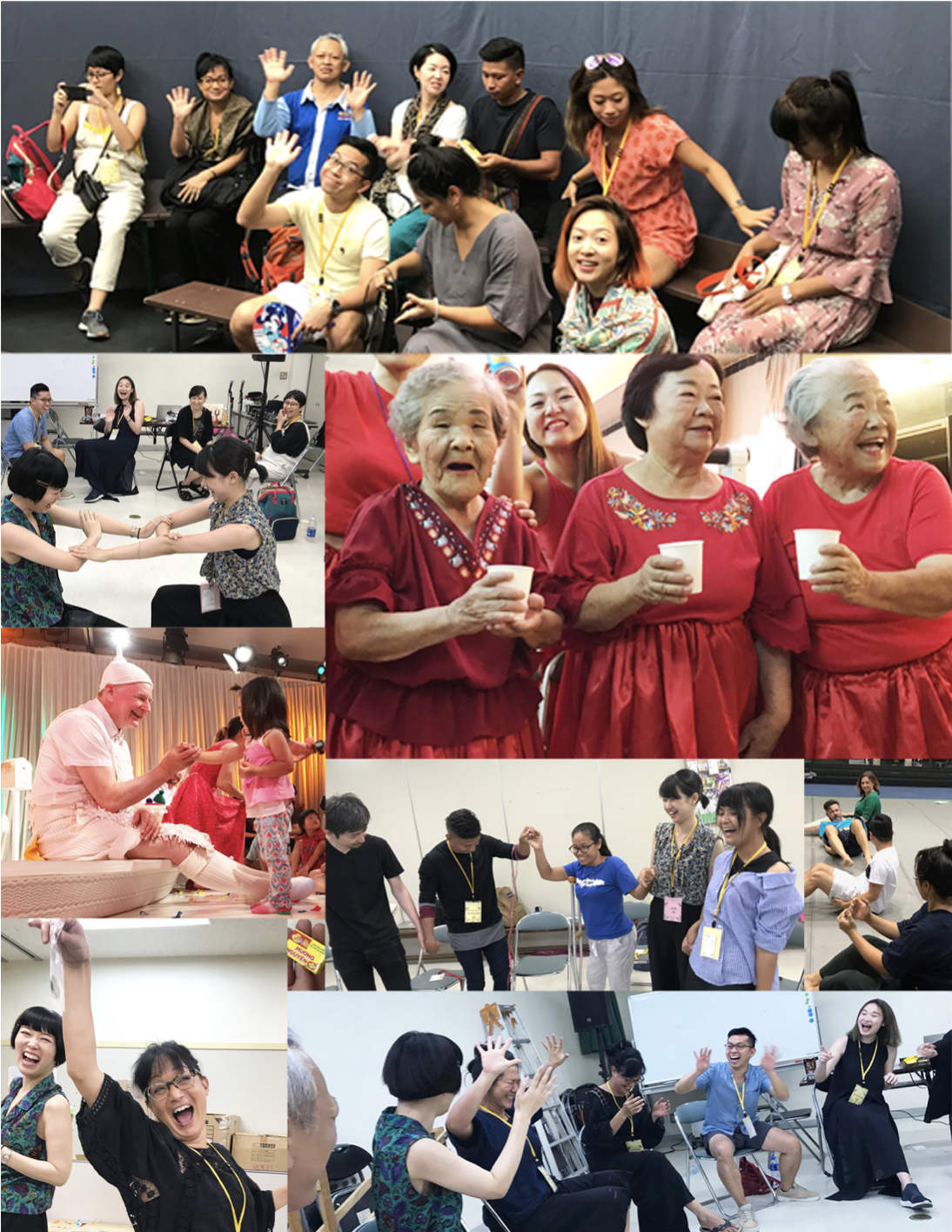