Papermoon Puppet Theatre was founded as a brainchild of Maria Tri Sulistyani (an illustrator, writer and a former theatre performer) and Iwan Effendi (a visual artist). Since 2006, this couple has been doing lots of experiments with the art of puppetry.

Based in Yogyakarta, Indonesia, in a country with world-renowned for its puppetry traditions, the young, expert artists of Papermoon are extending the form with their mixed-media productions, and creating works that imaginatively explore identity and society.

Not only making performances, Papermoon Puppet Theatre also presents its artworks through visual art installations, and shares its knowledge by making lots of workshops, and also initiated a international bi-annual puppet festival called Pesta Boneka since 2008. 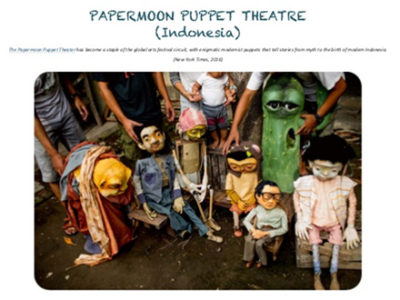