“
As a new festival, this was a great opportunity for BICT Fest to be presented in an international platform and context as well as cultivate connections with artists and professionals from around the world.
Adjjima Na Patalung (Thailand)

This report can be considered as a reflection upon my experience at ricca ricca *festa 2016 in Naha City, Okinawa, from the point of view of a new festival organiser. BICT Fest, Bangkok International Children’s Theatre Festival took place between 21st June to 3rd July, 2016 at Bangkok Art and Culture Centre, just a few weeks before ricca ricca*festa started. BICT Fest 2016, the very first edition, is a collaboration between Arts on Location and Democrazy Theatre Studio. It is considered the first international theatre festival for young audiences in Thailand. BICT Fest 2016 was a small size festival with 8 professional works from 6 countries, 13 theatre workshops, and a forum of international panels with 6 topics. 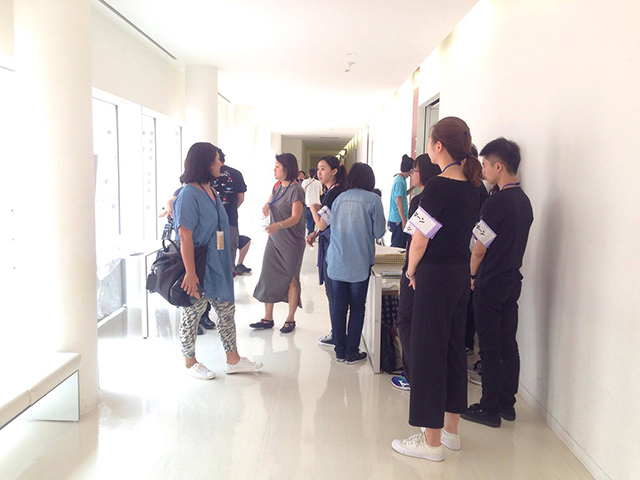 BICT Fest was among the theatre professionals from Southeast Asia working for theatre for young audiences (TYA), who were invited by ricca ricca*festa to take part in Asian TYA Networking events, as well as participate in the festival programs and activities. It was a great honour to be there. ricca ricca *festa is one of the international theatre festivals for young audiences that BICT Fest looked into as a good model. It is also one of the most successful and long standing international festivals for TYA taking place in Asia. To be able to come and experience an inspirational festival was such a great opportunity.

I traveled to ricca ricca*festa together with Pavinee Samakabutr (Producer) and Pinya Chookamsri (Assistant Producer). Before we left Bangkok, we set out our goals to make onsite research on how a successful festival is run, as well as see shows from many countries around the world and identify the current trends of TYA.

The extra-added and fantastic opportunity was the Asian Theatre for Young Audiences (ATYA) networking events organised by the festival and Japan Foundation Asia Centre. ricca ricca*festa invited TYA artists and professionals from 10 countries from the regions to the festival. Particularly, the professionals from Southeast Asian countries were asked to take part in 2 events:

As a new festival, this was a great opportunity for BICT Fest to be presented in an international platform and context as well as cultivate connections with artists and professionals from around the world. Importantly, apart from growing a worldwide network, one of BICT Fest’s aims is to broaden the existing connections in Southeast Asia. Therefore, the Asian TYA networking event posed another ideal opportunity.

Because of the fact that BICT Fest 2016 came to and end on 3rd July, 2016, we were aware of the load of post-festival responsibilities we had, but were very excited by the opportunity to be at ricca ricca*festa. Before leaving for Okinawa, we set out tasks for the visit:

It was very special to be able to attend the festival from day one through to the final day and to witness the work at the office, as well as the operation at the front of house and the venues. We got to see a great variety of professional shows from around the world, and participated in festival events and gatherings. From a perspective of a new festival, the experience has been very inspiring, and engaging in many levels. Looking back, in my personal opinion and impression, I think that the success of ricca ricca*festa, drawn from my experience in the 2016 edition came from the following aspects:

The curation: a broad spectrum of high quality international professional works; from family friendly shows to avant-garde performances, which appeals to audiences from different backgrounds, ages and expectation.

The platform for community of TYA/networking opportunity: an attempt to provide opportunities for meetings and networking events amongst TYA artists and professionals within Asia and from around the world, ie. Asian Alliance of Theatre Festivals for Young Audiences (ATYA), Asian TYA Open Talks and Network, and Belgian Focus, and the Asian co-production.

The organization/execution: highly professional with laid back attitude.

The festival programme consisted of the main programme (invited artists and companies) and the fringe (shows from companies, which had applied to showcase their works.) The companies in the fringe would raise funds to cover their own expenses. This year ricca ricca*festa showcased works from artists and companies from Belgium, Spain, Serbia, France, Sweden, Germany, Canada, New Zealand, Australia, Korea and Japan. There was a special programme of an Asian co-production, in which artists from Indonesia, the Philippines, Korea, Vietnam, and Australia were working in collaboration.

There were around 30 shows in total. I watched 12 shows. I wish I had managed to see more. The shows were mostly for 50 audience members with a few shows for less and a few for more (up to 150-200). The choices of shows I selected to see were based on my initial interest in non-verbal performances. There were a great selection of puppetry, story telling, mime, circus, dance, multi media, installation, site specific, adaptation of classics movement-based and interactive performances. What the festival offered was also shows that were family friendly, entertainment/commercial, spectacular, and avant-garde, ranging from comedy, tragedy, surrealism, and in-your-face type of theatre. I was very impressed by such a great variety and high standard of works and feel that for such a large size festival, ricca ricca*festa did manage to please their audiences as well as challenge their perspective at the same time.

I did select a few shows that were heavily wordy, as it was useful to see how they worked in translation, and what kind of audiences these shows attracted. The Japanese show I saw did not have an English translation. This could be due to the fact that ricca ricca*festa audiences were mainly Japanese? Although, there must have been many audiences coming from the neighbouring Taiwan, and China, as there were many front of house staffs, who could speak Chinese.

The shows were performed in different venues in Naha City around the office centre, most of them within walking distance to one another. The furthest were just a few stops away on the monorail. The main venue was the Okinawa museum, and the rest took place in a church, schools, Shintoshin park, and the community and cultural centres. 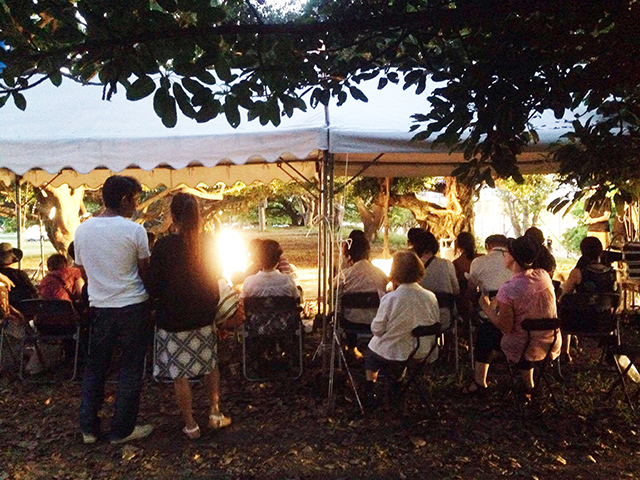 The Platform for Community of TYA / Networking Opportunity

One of the hightlights for BICT fest to be at ricca ricca*festa this year were the chance to meet with other TYA from Southeast Asia and to be invited as a member of ATYA. Through the two events mentioned earlier, we got to meet artists, professionals and festivals from the Phillippines, Indonesia, Singapore, Malaysia, Laos, Vietnam, Cambodia and Thailand (Semathai Puppetry Troupe). We also got to meet festivals from Taiwan and China. From the Open Talk and Networking events, we shared information about the situation of TYA and received updates about the scenes in each country. We also expressed our concerns and hope, and to understand that each country had specific need whether it involved politics, or artistic pursuits. And learned that we share the same problem, largely, lack of resources; financial, and human (skills and expertise). From these events, the beginning of the conversation has begun about future collaborations and co-operation.

There are a few interesting models of international festivals developing in Southeast Asia, while there are festival that focuses on showcasing of high quality professional body of works, there are also festivals that focus on creating a platform for artists development and community. I was very intrigued by Papermoon’s bi-annual Festival, Pesta Boneka in Yogjakarta, of its unique and beautiful concept about artistic sharing and creating a bond through puppetry between artists from different cultures. I believe this is a strong structure that could be exercised elsewhere in the world. Hence, a strong trend at the moment was about the emphasis on the importance of the process, and how we could successfully create a successful collaboration between countries. It was especially great for BICT Fest to be reunited with Papermoon Puppet Theatre in this occasion, as Papermoon was one of the companies invited to perform at BICT Fest 2016.)

The Belgian Focus (to celebrate the 150th anniversary of the diplomatic relationship between Belgium and Japan, ricca ricca*festa 2016 hosts Belgium Focus and invites 5 outstanding productions from Belgium.) was another event, which was particularly interesting for me, as Belgium is a country well known for its strength in TYA. It was a great opportunity and very inspirational to get to see such a rich selection and strong body of works from the country, and to get to hear from the artists and the companies talking about their works at the talk, and to get to have a direct conversation with some of the artists and learn more about their shows.

There was also a chance to meet and connect with other festival organisers and theatre from outside of Asia as well, a few of which were indeed an inspiration for BICT Fest. 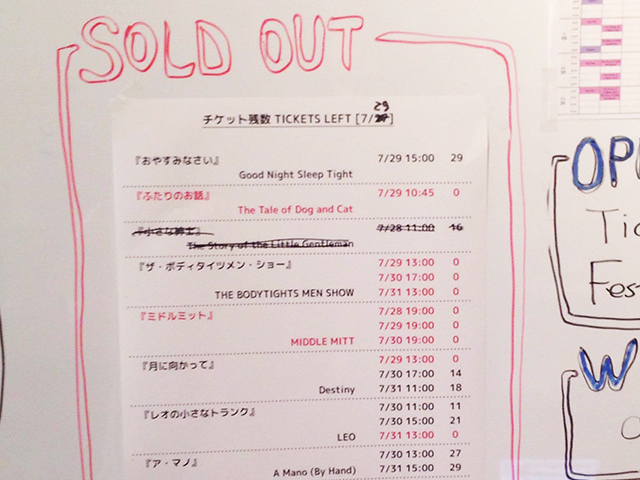 I believe that a successful festival is not only about the quality of the programme, but also about how it is delivered and the people working for the festival. I found that the operation at ricca ricca*festa 2016 was highly professional with impressive and well planned out management both at the office and venues, yet the atmosphere was relaxed, laid back, friendly and warm. This is a quality which is very difficult to achieve in a festival of this scale. At BICT Fest, we felt that we were taken care of very well throughout the time we were there. Big thanks to the staffs and the volunteers. Moreover, the information in the programme booklet was very clear and easy to read and follow, and there were sign posts to guide visitors around Naha City to the venues. We could feel how important ricca ricca*festa is to Okinawa.

One thing that I have noticed at most of the performances was that there were more adult audiences than young, mostly in international productions, and more children in the Japanese productions that I saw. This could be due to the fact that ricca ricca*festa has moved from Okinawa City to Naha City. The festival is taking time to build up a stronger bond with the locals.

I would like to express my gratitude on behalf of BICT Fest team present at the festival to ricca ricca*festa and Japan Foundation Asia Centre for having invited and supported us, and I do hope you would visit BICT Fest 2018.